All Collections
Tutorials
Export tools
How to export to .dae and import to PVsyst

How to export to .dae and import to PVsyst

Written by Tony
Updated over a week ago

In this tutorial we will discuss steps to be taken in order to import your 3D layout to PVsyst for the yield estimations.

After pressing Export to DAE button, you will have two options:

🛈 Note: Terrain and frames option will appear if you have a terrain mesh already generated in the layout.

After pressing Export to DAE button, select the location for the exportation and .DAE file will be saved. After a successful export a new window is opened.

If you have a terrain mesh generated on topographic survey, then you can select the second option and export terrain and frames at the same time. After pressing second option, please select the mesh. After a successful export a new window is opened.

🛈 The density and size of the mesh impact the import speed of PVsyst.
🛈 If you would like to learn how to prepare terrain mesh on topographic survey, click here:

How to import .DAE format to PVsyst software:

2. Select Construction / Perspective tool.
3. Press File → Import → Import a 3D scene (3DS, DAE) , and select your exported .dae file.
4. In Import results windows select the input size - depending on your drawing this can be either in metric or imperial units.
5. In Import results windows select PV objects sub tab and check Frames
(3D frames , 3D trees and 3D mesh will be imported automatically)

🛈 Note: The density and size of the mesh impact the import speed of PVsyst.

When defining PV fields in a shading scene, PVsyst will always try to identify their orientations automatically, grouping all similar fields into the same orientations. This is the normal behavior because the field properties give all the information needed to do so.

Problems arise when the fields are not created with a regular layout, for example when they follow the ground slope, meaning that there are too many different orientations. When this happens, we need to either increase the grouping tolerance or find other ways to get realistic orientations.

"An error occured in PVsyst": 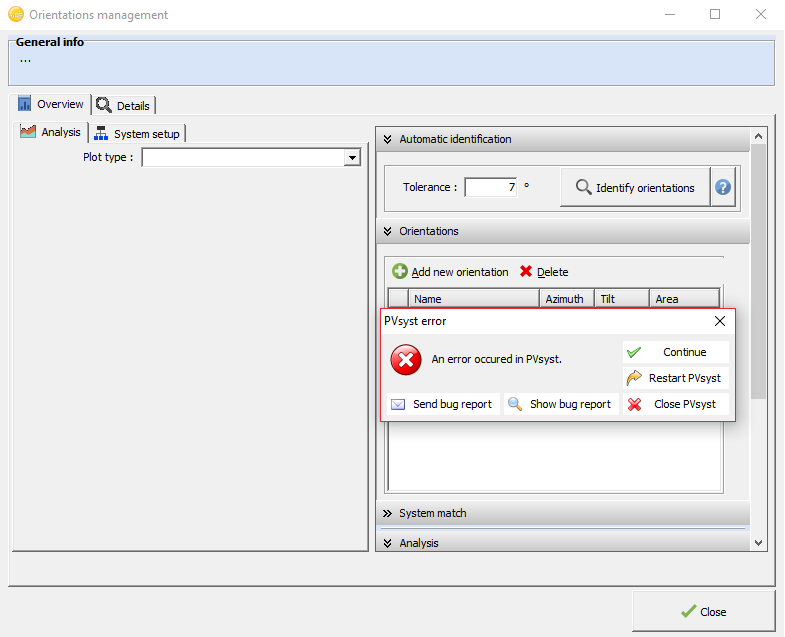 This error can occure when you import the 3D scene and don't save it. To workaround this you must first close the "Near Shading" window by clicking on the "Close" button. Then you can re-open the Construction / Perspective window again and it should be working just fine.

"X fields in the shadings don't have a corresponding orientation in the 'Orientation' part": 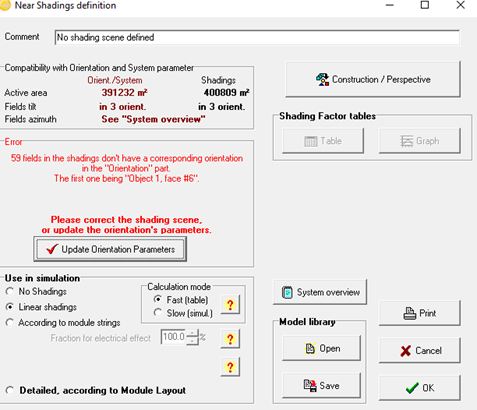 At this point you have to click the Update Orientation Parameters.
When you click this it’s updated and should fix itself, if it does not you have to fix the orientation parameters. 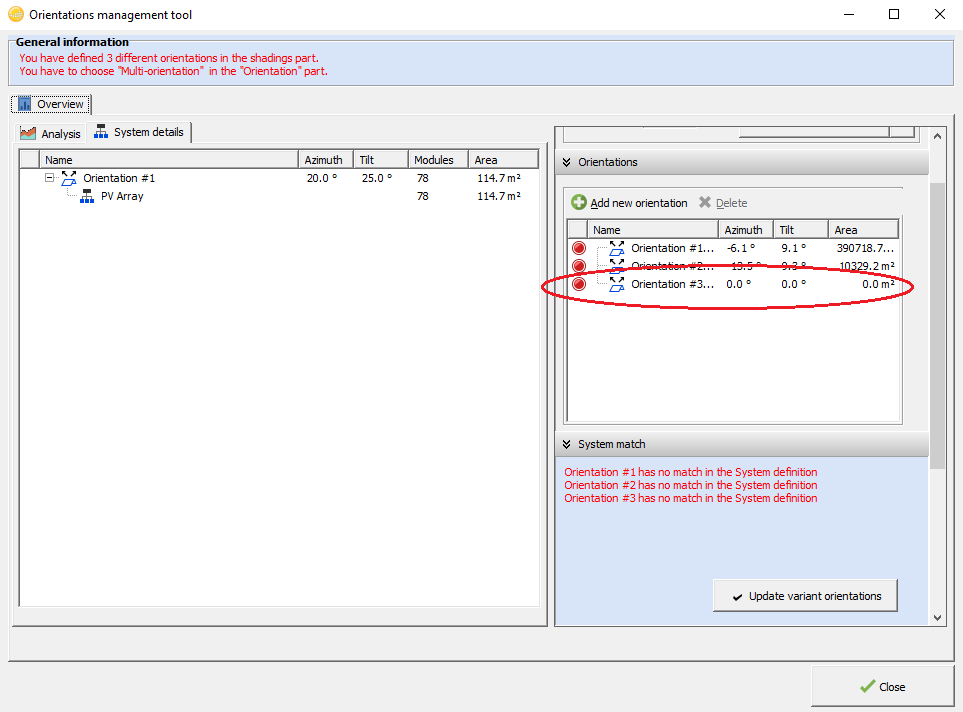 After importing into PVsyst there might be a third orientation created mistakenly. You have to delete this orientation.

Another approach to solve multiple orientations is portrayed in the second GIF below. By deleting all of the orientations and assigning the frames to the same orientation this problem can be fixed. The only other option to make PVsyst work with terrain based frames is to connect different sub-arrays to every orientation.

Here is a list of situations and how PVsyst will behave :

Fields are grouped within the same zone, and with other zones if they share the same tilt and azimuth definitions.

The first field is considered as a reference, then PVsyst tries to match other fields and if they don't it defines a new orientation.

For all scenarios, PVsyst then computes an average tilt and azimuth for each orientation from its fields.

This is the way orientations are defined automatically since PVsyst 6.64, but before that they were always defined using the "Random scene" algorithm which was not accurate enough and could lead to very odd orientation definitions. Also, there were no averages computed afterwards, the orientation tilt and azimuth were the ones from the first reference field.

Warning messages will pop up if you try to open an old variant with newly identified orientations that differ from the stored ones, therefore creating an incompatibility between the variant Orientation part and the shadings part. You can click on Yes and save your variant again to validate it again.