We're very excited and happy to be introducing this new release. It has features that enable more customization on both the table placement and electrical part of the software. As the new release is quite a substantial one - we will try to condense this and mention only the main changes.

We've made changes to the way frames are placed on terrain allowing for better customization for frame distance to ground. This new addition to the software can be seen in the Frame & park settings under Frame height range. Essentially, you can now add deviations for the height of the frame, so instead of placing all frames at the input minimum distance from the ground, tables are now able to have a range in which their height can fluctuate. This addition will prove really useful for analyzing how allowed table heights influence the possibility of frame placement on trickier terrain.

A tutorial on handling this new height range approach can be found in our help center.

This was the #1 most requested feature and we're very proud to be delivering it on schedule. Custom stringing gives the user the ability to draw up your own strings on any specific frames that you select. This allows the user to create a stringing template, apply that to multiple frames from a PV area & then use these custom strings to place equipment & also generate DC cabling based on the starting and ending points of the strings.

Since this is a relatively new concept, we highly recommend that you take a look at our tutorial on how to use this new design feature and to see some tips & tricks as well.

With the previous versions of PVcase, we had only the ability to connect entire frames to electrical devices. Now, with this new release there is no longer any restriction to connecting strings from different frames into one device. This electrical device connection rework combined with custom stringing opens up new possibilities with how customizable the electrical design part of PVcase can get. 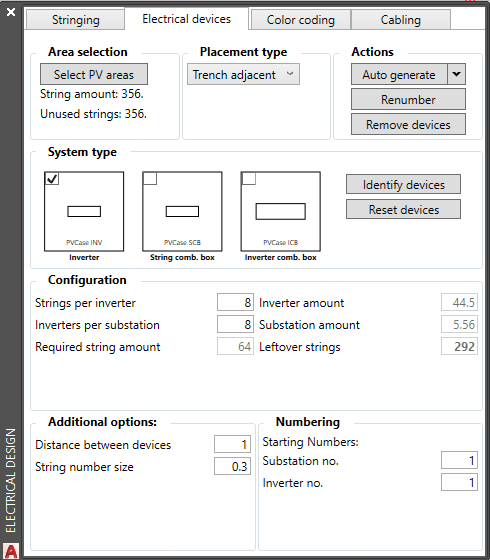