In this tutorial we will discuss the steps that need to be taken in order to create a electrical device layout for fixed-tilt systems.

To create a electrical device layout: 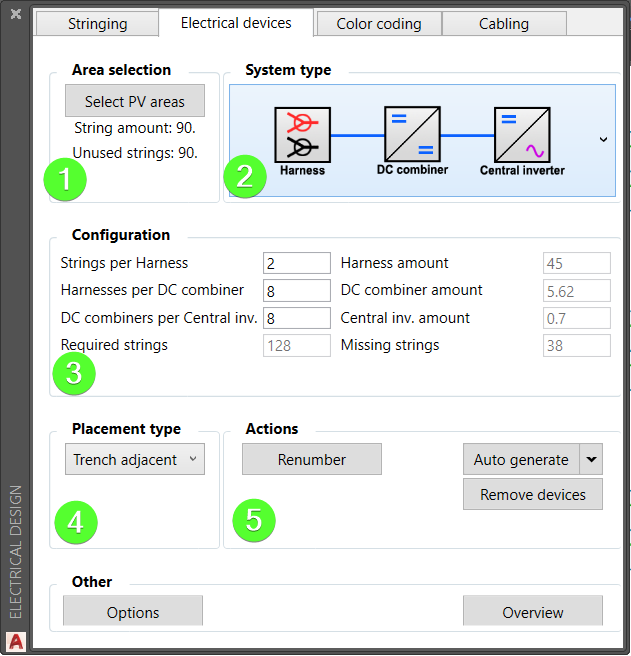 Currently there are 6 industry-standard system types that can be used for electrical device placement. You can select one of them from the dropdown menu accordingly. 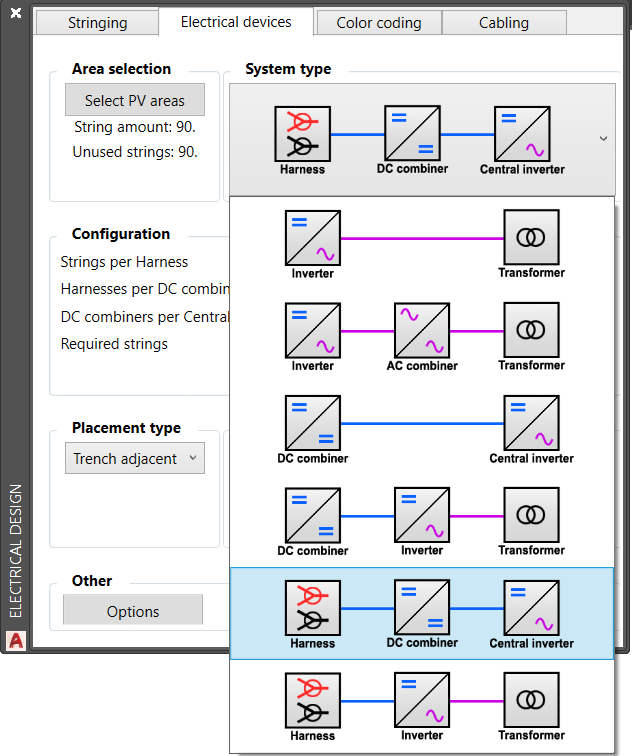 Harness system is usually used to combine several module strings together in order to run less cables to DC combiner or inverter. Generating electrical layout with such system will now place harness circles on top of the frame and will make such assumptions:

In the example below, harness is being placed in-between string ends for both + and - and assumes that two of these strings will be combined.

As with any of the devices, position of harness can be changed manually and will represent cabling according to the new position.

🛈 Cabling of a harness system will additionally include cable extensions that will be used to connect strings to harnesses. If such extensions are not needed - simply delete objects on PVcase DC cables (Harness extensions) layer.

In general, there are two actions that can be used to connect strings to electrical devices - Auto generate or Semi-auto generate.

In order to generate device placement you must first place your central inverter or transformer block object in your designated area.

If your placement type is Trench adjacent, you will also be asked to select device alignment line. All of the devices generated will be situated towards this line.

Auto generate connects strings to electrical devices based on user defined configuration and PVcase's automatic algorithm. An example below shows the operating principle of the auto generation when 8 strings are connected to one string inverter. Color coding indicates the final connections.

The software starts connecting strings from the opposite side to the device alignment line and tries to fill up one full device without having to connect frames from different rows ( 1 ). At the end of the row the algorithm sees that there's a lack of strings for a fully connected device ( 2 ) and keeps them unconnected until it encounters a similar situation on another row ( 3 ). This algorithm results in for the most part evenly connected strings and practically connected left-over strings that are close to the device alignment line.

In situations when the amount of strings per device does not divide per frames evenly, electrical connections are made with the same logic - trying to fit a fully connected device per row and leaving out strings. In the example below, a frame holds 4 strings but the combiner box connects 10 strings. In this case, for the most part of the area we have 1 combiner box per row and 1 combiner that connects leftover strings from each row. The blue color indicates the inverter that has leftover strings connected to it from each row.

Semi-auto generate lets the user assign strings to devices based on their own assessment by requiring to select particular strings for each electrical device. This gives a lot of flexibility in situations when the layout is too complicated or simply not suitable for auto generation (example below).

The automatic generation algorithm works well for the most part but can produce these impractical situations in which a combination of the auto and semi-auto generation must be used.

1. Frames are connected far from each other.

In some cases the auto generation algorithm finds missing strings for another connection quite far apart:

In this case, you can use the semi-auto generation to reconfigure connections:

When you prefer to leave uneven connections at the opposite side of an area or only connect a part of an area using auto generate you can do this in two parts.

The first step is to use auto generate on evenly connected frames on one side( 1 ). Then the second step is to select the rest of the strings in a separate generation ( 2 ). 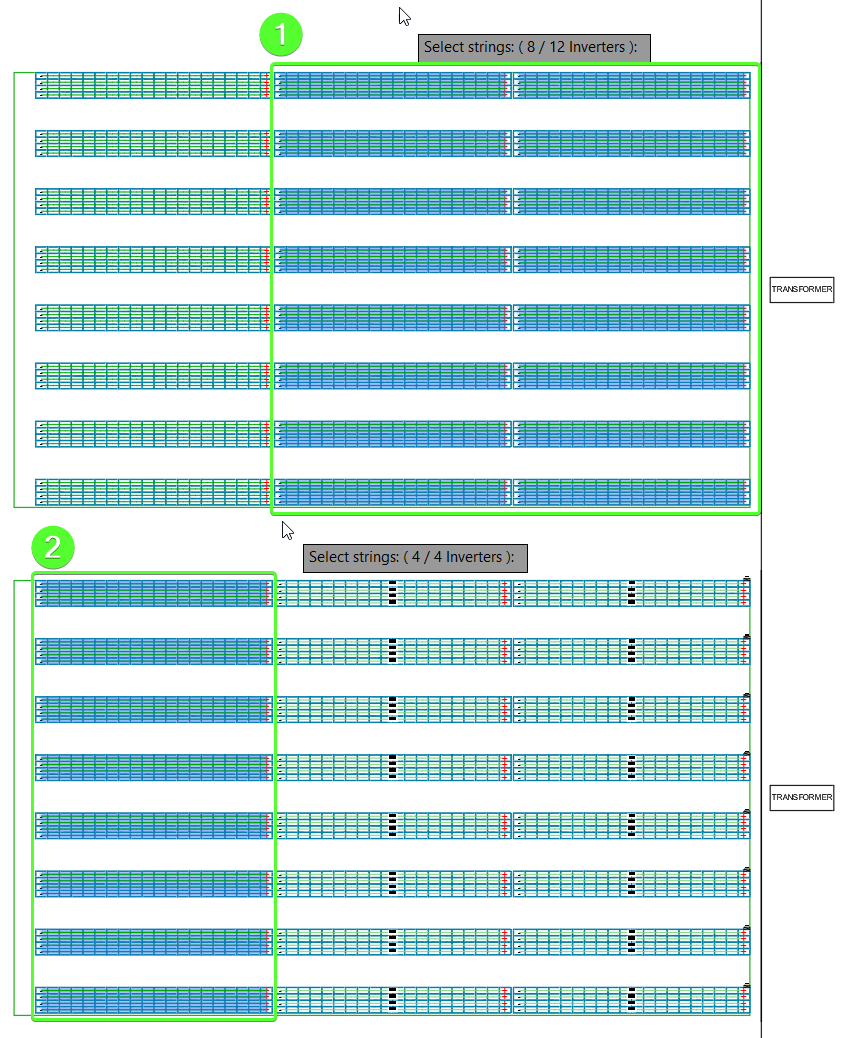 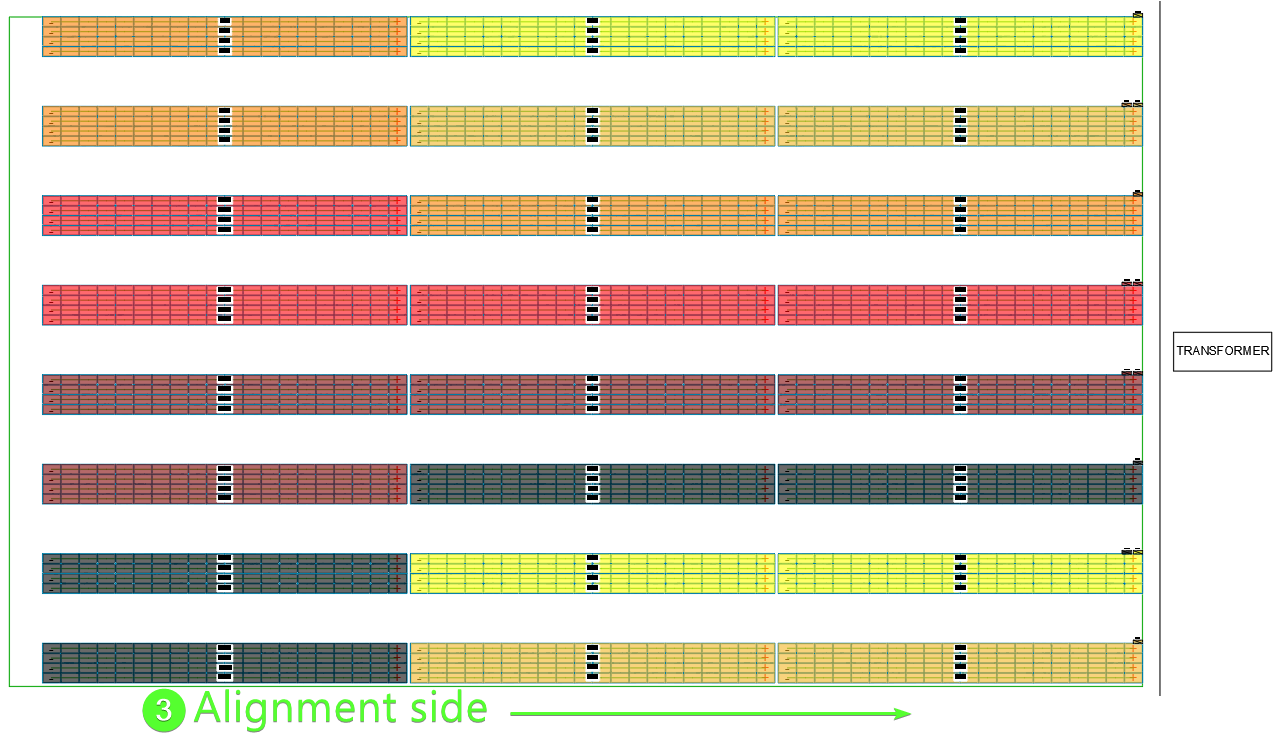 We would usually recommend using a combination of both these generation types Usually the automatic generation algorithm works fine for a larger part of your fixed-tilt area. When some changes need to be made for trickier areas - that's where semi-auto generation comes in.

For instance, in the example situation below there are two areas that connect inverters to one transformer. 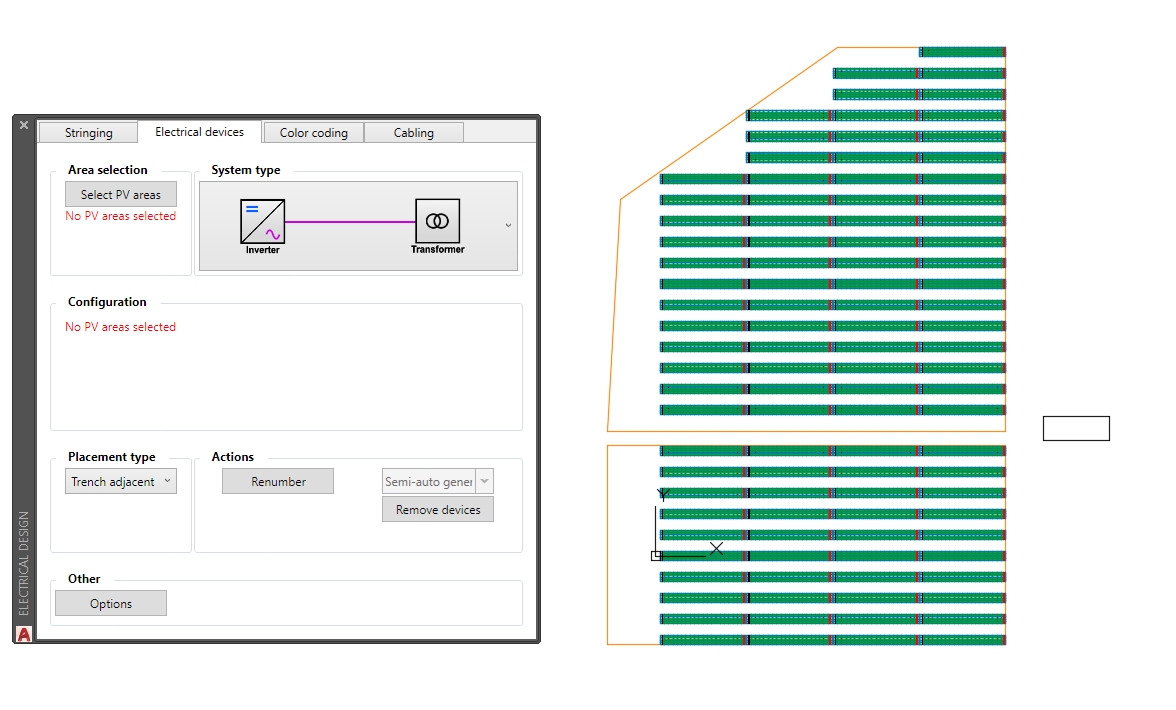 This larger highlighted part of both areas can be generated using the auto algorithm. 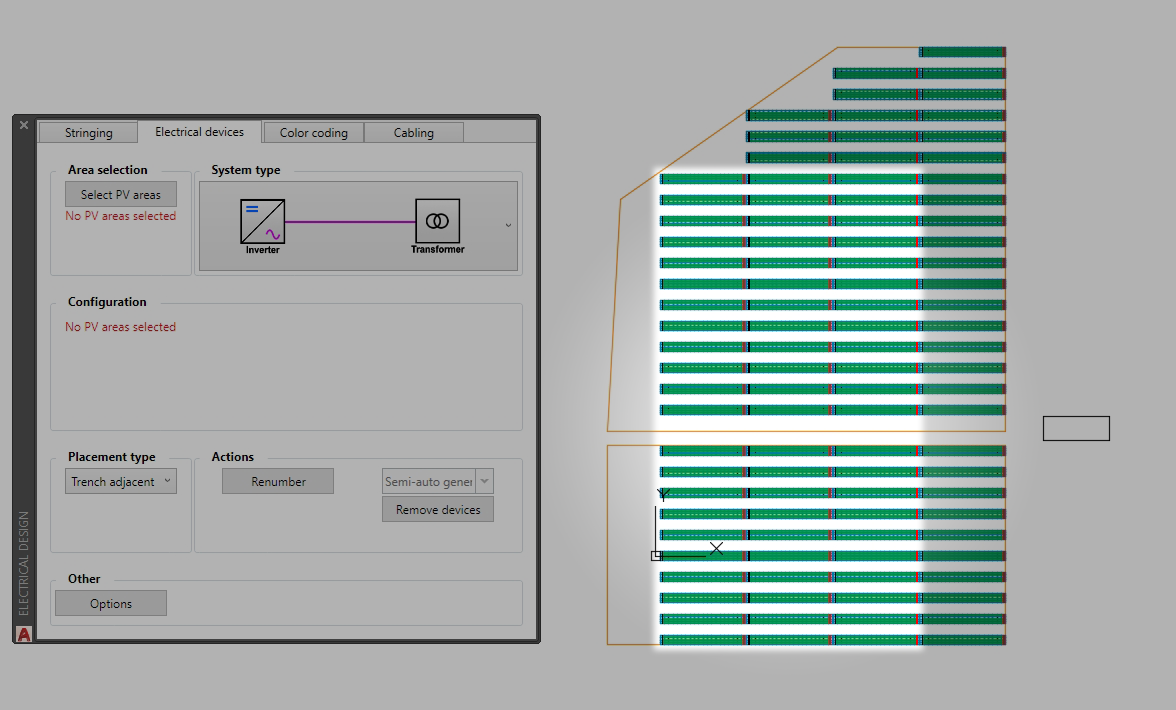 A step by step process of that can be seen in the GIF below.

Afterwards, semi-auto generate can be used on the rest of the upper PV area.

For the rest of this first area the auto-generate can be used again.

Important: Notice the stop when connecting two areas with each other. This is because the only way to do so is by using semi-auto generate.

Having placed devices for both areas there's just one thing left to do - fix the numbering.  Doing the generation in parts results in placing devices which in turn impacts the numbering. Which means situations like this appear: 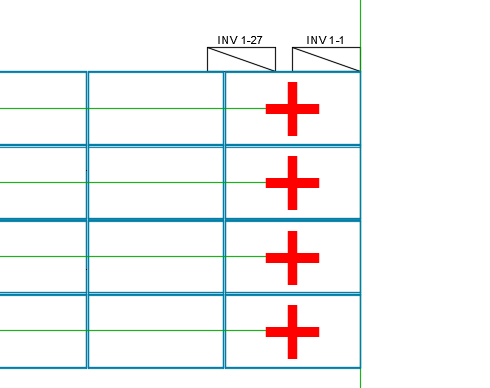 To fix this we have the Renumber feature which allows us to set a starting number for a device and then select devices either one by one to define the order or use a multi select for default numbering.

This tab helps to work and navigate in fields with electrical design as it lists all of the devices generated in expandable/collapsible tree interface. 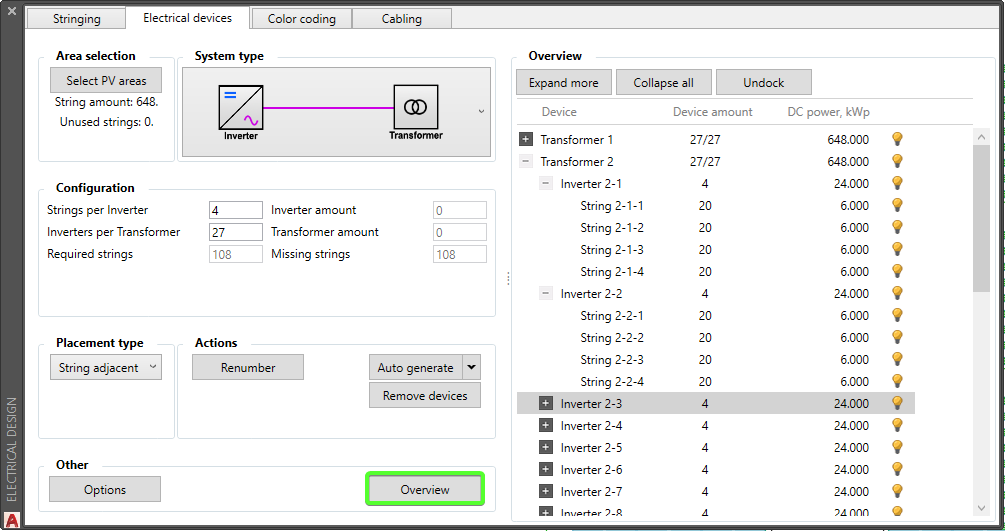 Here are some of the things you can do with the Overview:

2. Locate object - locates certain device or string inside a drawing. Simply right click on the component in the overview tab and hit locate object or double-click.

3. Hide objects - ability to hide objects so that you can better track progress, identify easily which parts belong to which device and of course vastly improve the performance on large scale sites by hiding parts that are already finished.

4. Renumbering - you can use overview tab to change numbering of transformers, central inverters and other devices.

🛈 To save some space on screen - you can use the Undock button and place overview tab wherever you like.

To continue to electrical device color coding, click the button below:

Color coding
Did this answer your question?