All Collections
Tutorials
Other
Tips & Tricks

AutoCAD natively has a function to select objects either by green or blue selection. Both of these selections can be used on multiple objects once PVcase prompts to select any particular one. This means that even if several objects are selected, PVcase will filter unnecessary ones out and will select prompted object.

For example: When PVcase asks to select PV area, mass selection with all objects included can be done quickly without the need of particular polyline selection. This applies to most of other selections in PVcase.

In general PVcase algorithm always choose generation starting point when generating fixed-tilt system PV layout. However, if generation has to be done from any particular part in PV area, offset boundary can be used.

For example: Generated area does not satisfy requirement for particular frame placement. Adding polyline contour on PVcase offset layer will render PVcase to generate from the new position.

PV areas with generated frames can be simply cleared by right-clicking PV area and selecting to Clear PV area under PVcase menu instead of using AutoCAD functionality like Select similar or Qselect. 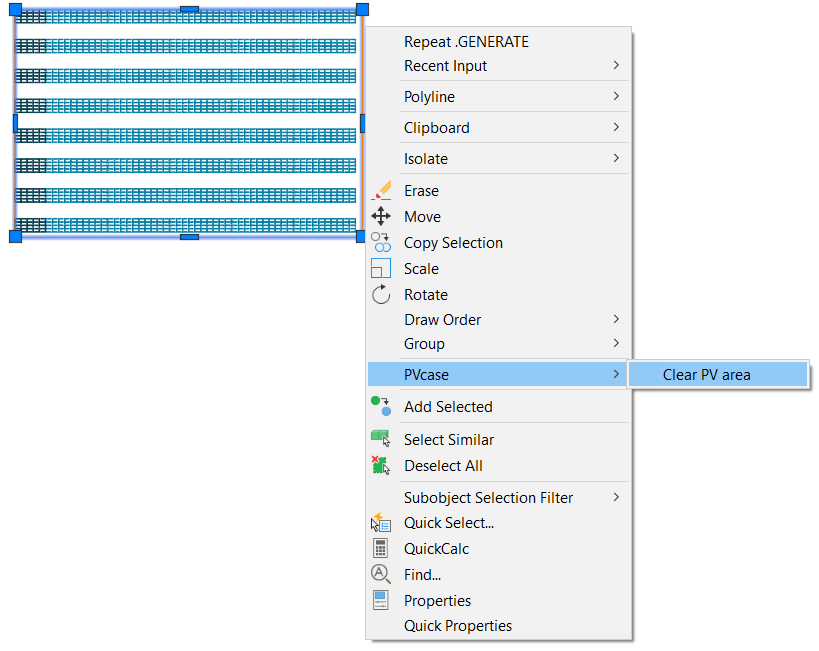 Primarily Generate tree shading functionality is used for topographical surveys with indicated trees to create shaded area and 3D object of the tree (For shading evaluation in PVsyst). If such data on the site is absent, 3D tree object can be created by manually adding simple circle and a text object in a middle with potential height of the tree. This is typically used in initial stages of the project when topographical data is not available.

Sometimes one polyline contour has to be split into two. This can be a tricky and time consuming process but AutoCAD funtion BPOLY or BOUNDARY can help. It works by spliting areas into several pieces according to the line that splits them.
For example: An area below has one PV field that is aligned towards left side. If there is a need to align frames towards a middle, BPOLY function an be used to split this area into two areas for regeneration. Note: Make sure to select Boundary set manually by selecting area which has to be split and polyline that splits the area.

PVcase functionality Optimized frames can be used at any stage of the project to hide unnecesarry 3D objects and make work with big PV areas smoother. This means that we can also enable Optimized frames before generating to avoid AutoCAD hanging.

PV Areas with high power capacity typically slows down AutoCAD substantially due to high number of obects and a 3D aspect. If Optimized frames functionality still does not offer optimal performance, we suggest splitting project into several DWG files and Freezing unnecesarry layers.
Note: AutoCAD has confirmed that Freeze❄ functionality increases performance more than Layer off 💡 as the turned off layers are still being refreshed in background.

A quick tip is to Freeze topographical data layer once it has been selected for generation as PVcase will not ask to select this data in on-going AutoCAD session anymore. This also increases performance of AutoCAD.

If new topographical data should be selected - use Reselect terrain in Layout generation settings. 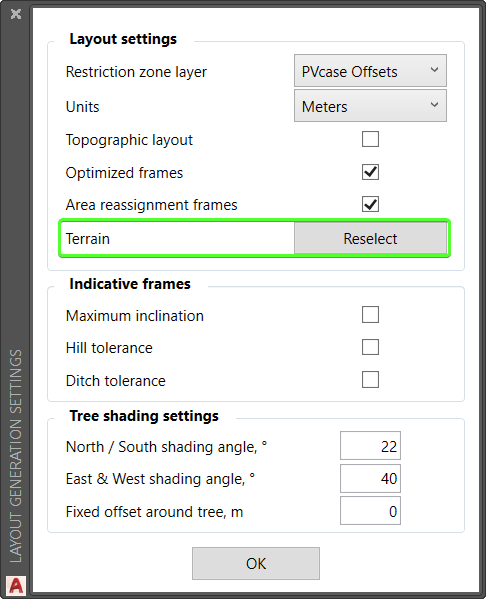 When doing semi-auto electrical device placement, it is good idea to isolate layers that will not be used for device placement by using LAYISO command. This way PVcase will hide strings that are dedicated to particular device helping to easily follow design progress.

Objects to select for excluding from isolation:

Note: if your AutoCAD isolation settings are set to Lock and fade instead of Off, it can be changed by typing "Layiso" and "S" for settings.

Some of the PVcase features have command line settings that can be changed to alter the output of the feature. For instance, when you use Draw road and set the initial parameters they get saved.

However, if you want to change them later on all you have to do is click on the command line options.

When you're working on larger scale designs AutoCAD degrades in performance due to the amount of objects present in the drawing. To overcome this limitation, we've introduced the ability to freeze tables and other objects that belong to an area if you're not working on that particular area.