Written by Angela Farias
Updated over a week ago

To start with a single-axis tracker generation it's necessary to proceed with the setup of the frames and the placement settings of tables. To do so - click on Frame & park settings and go through the three tabs in there. 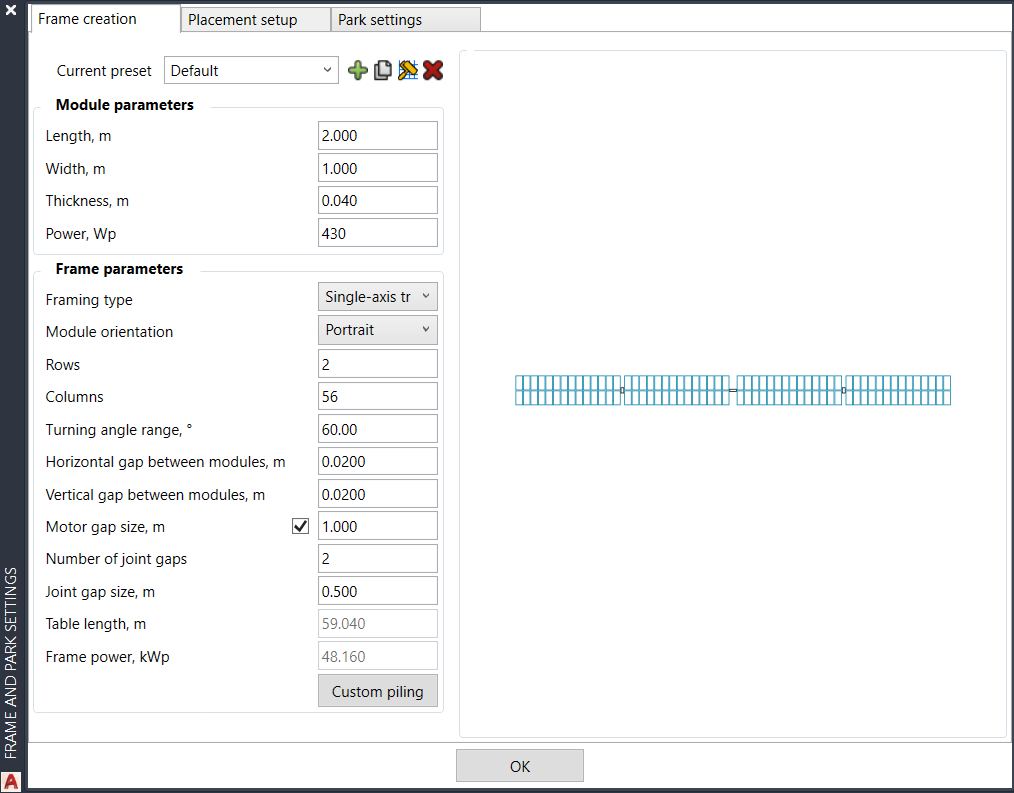 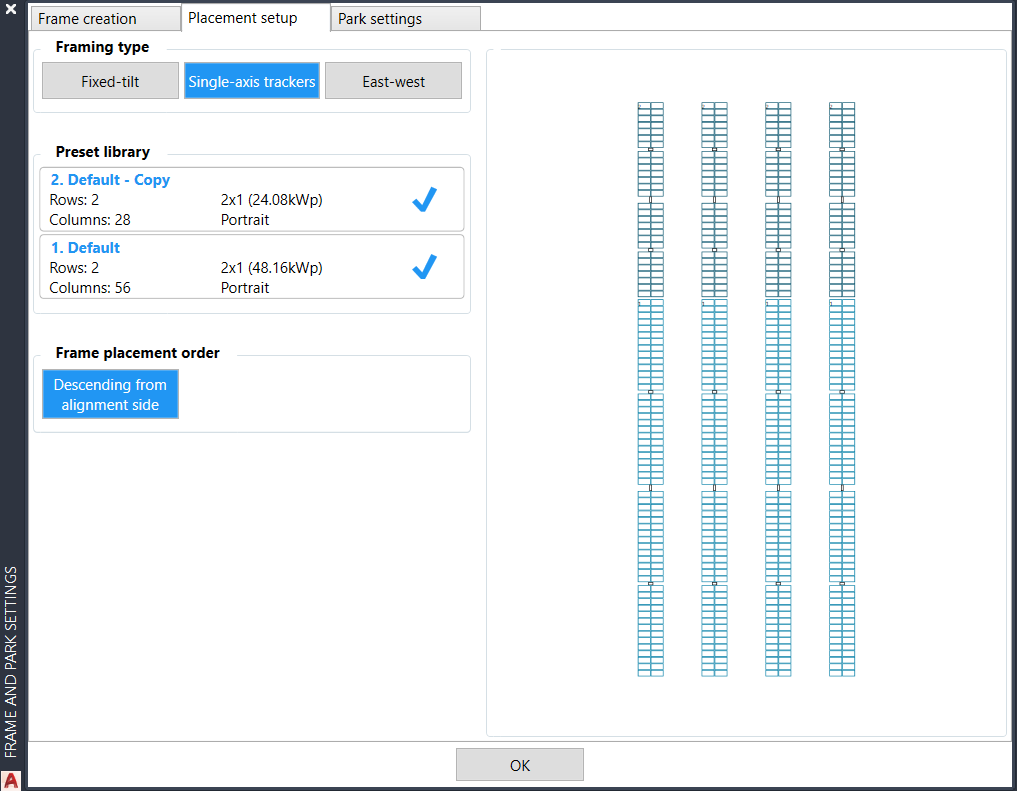 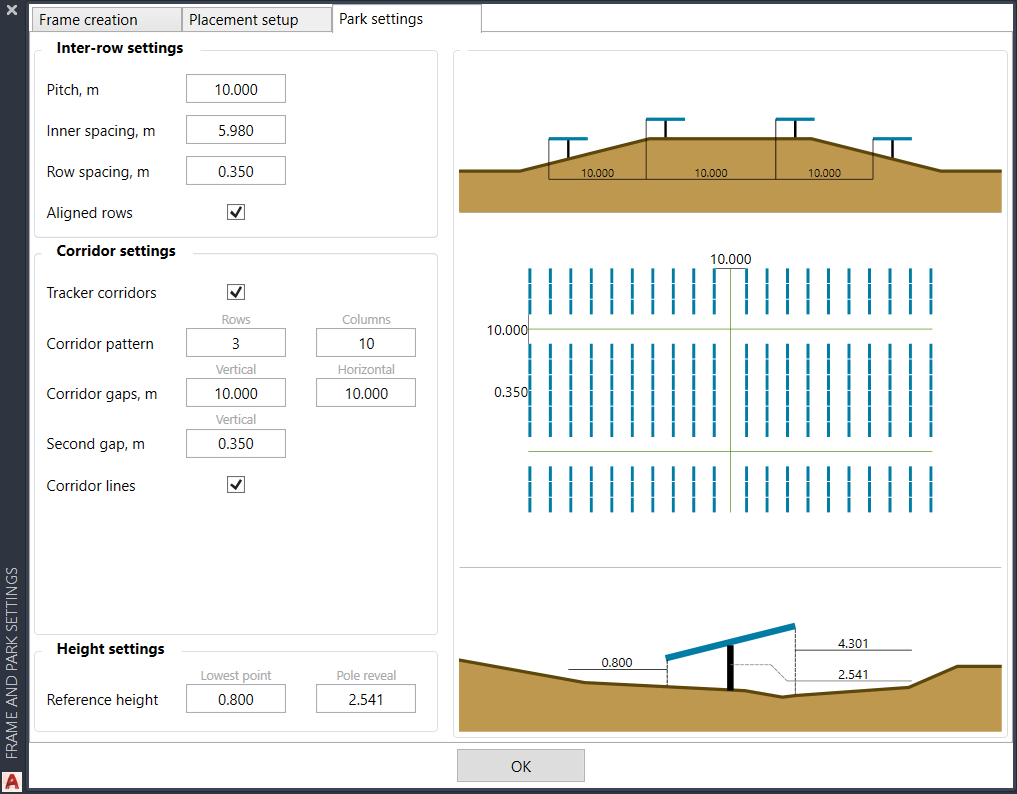 In Inter-row settings, you can define distances between tables like inner spacing (E-W spacing) or row spacing (N-S spacing).

One of the more important settings here is the Aligned rows toggle which changes the table placement output. You can hover over the checkbox to understand the difference:

Enabling or disabling this checkbox in the park settings will directly impact the table generation. Using aligned rows will allow you to have a more orderly layout when free space is plenty. However, if you don't have a lot of space and need to fill in more capacity then not aligning the rows is a better idea.

In the Corridor settings, you can define spaces for access or maintenance roads, therefore, splitting up your tracker layout into separate groups. And it's also possible to control a second vertical gap when using corridors. This allows the creation of patterns to better position central inverters and roads. The first step is enabling the tracker corridor settings and change the second vertical gap value to be equal to your row spacing.

Once you have the trackers placed like this you can easily identify where you'll need to position your central inverters for uniform distances throughout your project.

To streamline this a step further you can enable the drawing of corridor lines which can be later used to easily place the roads as well.

In the Height settings section you can set the table height for the entire generation. You can later on change table heights one by one by changing the reference heightand using the Adapt to terrain feature to lower or raise a table after having already generated it.

In the Layout and generation settings menu it is possible to proceed with the following selections: 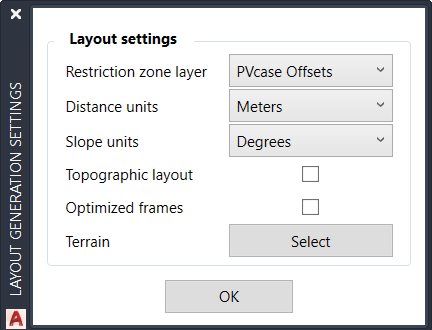 Boundaries or PV areas are defined as a region drawn with a closed polyline. In order to create such a boundary - you can use AutoCAD's polyline function or any other drawing tool that will give you a closed boundary (i.e. rectangle)

Usually, this region or boundary is separate from the actual site boundary and is offset from it. 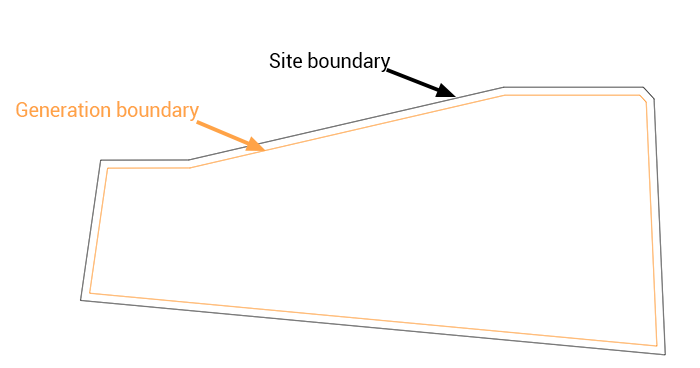 🛈 Be sure to always close the polyline by using the close command (enter C into the command line while still drawing the line) or attaching the polyline end vertex to the start point with the green object snap.

The following error message appears when there are problems with the PV area region. Try checking the vertices to see whether you might have any polyline crossing over each other that create smaller areas or perhaps vertices on top of each other.

This means, that any closed areas on this layer will force the software to avoid placing frames in that area - you can draw it using the same approach as you would for a PV area (Closed polyline).

Once the parameters are all set, the generation can be done by selecting one out of two-generation types:

Alignment line - PVcase aligns tables towards a line that can be drawn on the boundary of the PV area, inside or outside. When drawing the polyline simply select as many points you need and hit ENTER or SPACE after you're done.

After generation, you can freely move tables around and copy them. However, sometimes they might turn red because they need to be adapted to the terrain or reassigned to an area. Until they are resolved they will not be counted inside Layout information.

🛈 To learn more about how to work with shadow frames please click below.

To align or not to align rows

In some circumstances, it is important to understand the differences between using and not using aligned rows and what changes in the layout this can introduce.

For example, using aligned rows might create a layout that has to be adjusted to fill more capacity by moving tables around by hand (see picture below). Rerunning the same generation without aligned rows will put tables closer to restriction areas but the rows will not be aligned between each other: